All information here is in draft form. More details will be released on publication of the peer review journal. For specific questions see 'contact us'

Methods
We sent an eight point survey to 1318 medical students asking whether they had experienced or witnessed discrimination and harassment and whether they reported it. We included free text eliciting what types were experienced and what factors influencing reporting. We held two focus groups based on real scenarios to further explore issues. We analysed qualitative data using a framework analysis approach.

Conclusions
Harassment and discrimination are prevalent in this medical school and are associated with gender, ethnicity, sexuality, year disability, and being in a clinical year group. The current reporting system is rarely used and perceived as ineffective. Medical educators should use these findings to inform prevention and evaluation strategies. 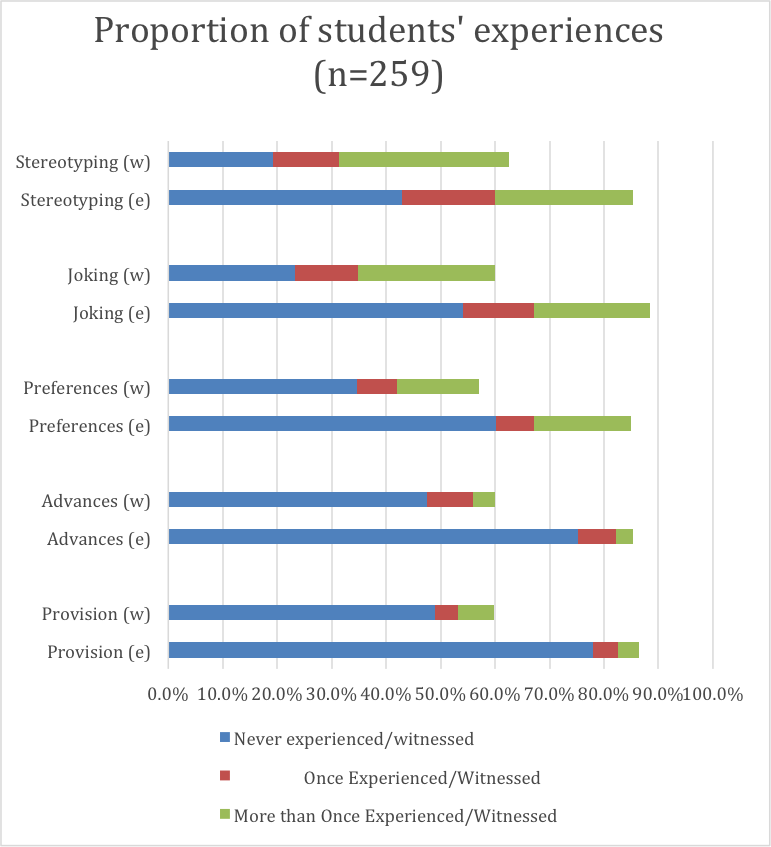 Students discussed everyday discrimination and harassment on 56 occasions. These described events that were perceived as normalised behaviour and based on assumptions and biases. These commonly included invasions of personal space, humour based around belittlement, and use of derogatory language based on protected characteristics e.g. ‘gay’. As one female participant put it (F1):

‘there’s a culture of sexism and belittlement of women as banter’.

Another participant (s7.14) described an occasion where

‘The entire surgery [the surgeon] was touching my shoulder, like patting me… I was about to punch him… it bothered me’

Another participant (F5) noted that

“[the gynaecologist] would be touchy-feely with all the females …. [But] I didn’t see him doing it with any of his male students”.

‘an event is [so] normalised and ingrained that you’re not quite sure if you are overreacting’.

Structural discrimination and harassment
56 statements described events within an educational environment that encouraged some students and excluded others based on protected characteristics. Several described how they had noticed students being singled out either by educators directly or through lack of provision of appropriate facilities such as lack of prayer facilities. As one student (s.7.36) described

‘being looked at constantly by the facilitator as if I should be the spokesperson of my race… [wrongly] assuming me as being Somalian’.

Another student (s8.31) noted a student colleague who had

‘wanted time off for Eid, but was refused…even though she was willing to make up the time’.

Exceptional discrimination and harassment
On 20 occasions students noted events that described frank actions or words that directly abused, harassed or excluded participants. This included several reports of people with an educational role using terms such as ‘chavs’ (p.7.45), ‘spastics’ (p7.46), and females as ‘flowers’ or ‘blondes’ (p.7.32). One student (p7.6) described an incident whereby

‘A consultant made sexual advances towards me… nothing serious came of it but I felt I couldn’t say anything to anyone’.

Another student (p7.3) described an incident where

‘a consultant grabbed my vest…via my collar and asked me to leave’.

Inaccessible and ineffective reporting system
On 51 occasions students described the system for reporting harassment and discrimination as inaccessible, burdensome and unlikely to change the situation. One student (F5) said they would not report because of

‘the logistical hassle of having to do it...I’d just think that it was not worth the hassle...that’s why things get swept away.

Another student (F6) said that
‘ [reporting] is a personal thing… you want [to report to] someone who knows you… who knows what you’re like and they know that you’re not necessarily making something up.’

Fear of consequences
On 33 occasions students described that they feared that, in the case of reporting, they would have personal consequences and that this would stop them from reporting. These centred around fears of impacts on students’ education, career prospects and fears of being labelled within a hierarchical context.
One student (p10.32) said

“I thought I would have been thrown out of medical school [if I reported] but in retrospect I wouldn’t”.

”I’m silent because I don’t want a reputation as a whiner.... but I realized we’re all just ignoring it”.

“I’d get in more trouble if I reported it...he could contribute towards my final mark in that unit”.